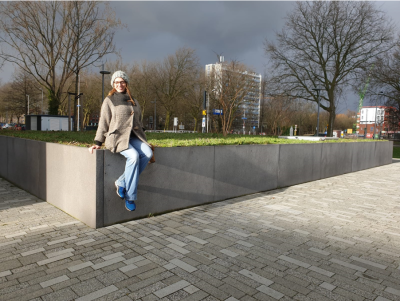 Tell us a bit about youself!

Where did you grow up?

I grew up in a small town in the Netherlands in Zuid-Holland. It really didn’t have much going for it except that we lived next to the windmills of Kinderdijk. Yeah. Windmills were the most exciting thing growing up…

What is your interest growing up?

Actually I always wanted to go into Industrial Engineering starting when I was 13… Until I discovered I didn’t want to design “the next microwave” for the rest of my life.

Share that quirky side of yours, what is it?

I can tell you how many calories, carbs, proteins etc. are in any type of food within a 20% uncertainty range haha. These are the marks of once having been a Nutrition and Health student: it is mandatory to have an obsession with food to be admitted.
Also I can laugh about my own jokes really hard.

What is your experience prior to joining EPA?

Before EPA I studied Nutrition and Health at Wageningen University & Research (Netherlands). This study was mostly biology-focused; we were in the labs studying cells very often. However, this university is also very liberal in the courses that they let you take in the third year (basically anything as long as it’s uni level), so I got to look beyond food in my third year and did some computer science and agent-based modelling courses.

What led you to joining EPA? Your expectations of EPA?

During my first year in Wageningen I realized that I wasn’t really interested in anything smaller than a human, so I struggled my way into my third year, in which I could finally do some completely different things. I didn’t know which MSc to do, but EPA was one of my options. During an ABM course, I met a former EPA student who was doing a PhD in Wageningen and he convinced me to do EPA by highlighting the diversity of the students, the wide range of projects that you will work on and the high number of modelling & groupwork skills that you learn. He just was a really good salesman.

How does it align with your interest(s), are the expectations met?

It quickly turned out that I really had no idea what I got myself into before starting EPA. I thought that it was much more about hard-core programming and I had no idea that we would focus so much on complex problems. By now, I am really glad to have gained a systems thinking perspective. I simply love to explore a situation in which everybody wants the same thing (e.g. a good future for their children), but we cannot seem to make it happen. EPA has taught me that you can never assume that action A will lead to event B, as due to other unforeseen factors, you might as well end up at C, D, Z or the moon. And I have indeed worked at a variety of projects and cases and I have become a pro at doing groupwork, so those expectations were met as well.

What is the most exciting opportunity that you have been working on since EPA?

I did a project with the RIVM on meat consumption in the Netherlands. We were to make an agent-based model of this, so that the RIVM could learn about the ABM model-building process. There I was, telling a number of professionals how ABMs work! That was pretty cool, especially since this was the first project in which I could apply knowledge from my BSc. The result was that the RIVM is going to investigate further how they can apply ABM. I am looking forward to seeing their first model.

How would you describe the impact you’d like to make after EPA?

The more I think about this question, the harder it is to answer. On the one hand, I really like the analytical challenge of modelling a system. On the other hand, I realized that I find fulfillment in helping other people reach their full potential. So currently, I am on the fence as to whether to take up a career in coaching or to become a consultant. Both contain elements of EPA; especially to always question what you see and never accept a problem at face value. I think this is because EPA is more of a lens through which to view the world than a narrowed-down study programme. It doesn’t make the choice for a career much easier, but I am sure that whatever I do after EPA, it will not be boring.

And any messages, advice to current/ prospective EPA students out there?

Your model can be oh so wrong, if nobody finds out: no harm done!
(Just kidding, check your models!)